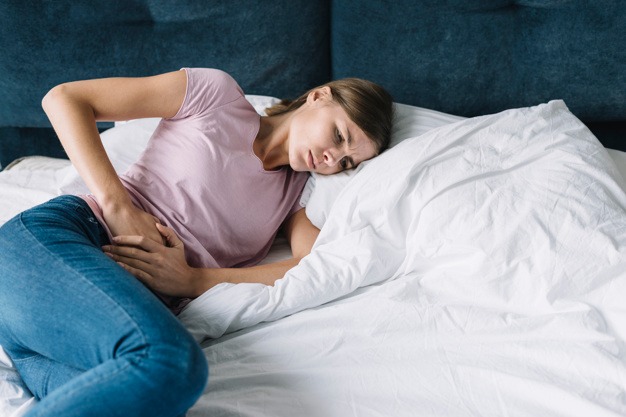 If you have PCOS, your mensuration cycle may be ‘irregular’ or in some cases, there is no menstrual cycle at all. A regular menstrual cycle lasts 28 days with one ovulation when eggs are released, but periods between 21 and 35 days is considered ‘normal’.

Each month, the ovaries discharge eggs to be fertilized by the male sperm. The discharge of an egg every month is called ovulation. Polycystic ovarian syndrome symptoms, or group of symptoms that disturbs the ovaries and ovulation. Its three main features are:

The polycystic ovarian syndrome can cause irregular periods other than that the other most common symptoms of PCOS are:

Irregular menstrual cycle: Absence of ovulation stops the lining of uterus from shedding every month. Few women with PCOS get less than eight periods a year. Most women who suffer from PCOS complain of extreme or excruciating pain during periods.

Bleeding severely: The lining of the uterus gets thickened over a longer period of time owing to irregular periods, this may in turn lead to heavy flow of bleeding than normal.

Hirsutism: More than 75% of women with PCOS also suffer from excessive hair (hair on their face and body — plus hair on their back, belly, and breasts). Excess hair growth is termed hirsutism.

Acne: Oily skin due to male hormones leads to cystic acne and presence of nodules rather than normal acne which are smaller in size and respond to treatment.

Weight gain: Up to 70% percent of women with polycystic ovarian syndrome are overweight or obese.

It is important that women with PCOS regulate their monthly cycle to avoid any long-term complications like infertility, increasing the risk for endometrial cancer. Irregular periods is the first thing to manage in PCOS along with lifestyle and diet modifications.

Oral contraceptive tablets prescribed by a doctor can regulate the monthly cycle. The medication can also reduce pain during menstruation/period, menstrual cramps, acne and extra facial and body hair growth. These medications comprise of:

Polycystic ovarian syndrome irregular periods — If ovulation does not happen, the lining of the uterus (called the endometrium) does not homogeneously shed and regrow as in a usual period cycle. Instead, the endometrium begins to develop in thickness and may shed erratically, which can lead to heavy and prolonged bleeding.

Women with polycystic ovarian syndrome period pain usually have less than six to eight menstrual periods per year. Some women have normal cycles during puberty, which may turn out to be irregular if the woman grows overweight.

Menstrual cycle in PCOS — In PCOS, the ovaries are lined with multiple cysts (small sacs/cysts ranging up to 4 to 9 mm in diameter) therefore, the term polycystic ovaries. None of these small sacs can grow to a size that would activate ovulation.

As a result, the blood levels of estrogen, progesterone, LH, and FSH in women with PCOS are out of balance. Androgens are generally produced by the ovaries and the adrenal glands. Examples of androgens include androstenedione, testosterone, dehydroepiandrosterone, and DHEA sulfate (DHEAS). Androgens may develop and increase in women with PCOS because of the high presence of LH but also because of the high stage of insulin that is typically seen with PCOS.

Insulin oddities — Insulin is a hormone that is produced in the pancreas and regulates blood sugar. When blood glucose level is elevated after having food, these cells release insulin to help the body use glucose for energy.

These circumstances are identified with blood tests.

How does PCOS disturb your menstrual cycle?

Each month a follicle ages, matures and gets released by the ovaries for fertilization. But due to the hormonal imbalance in PCOS (naturally higher stages of androgens like testosterone and high stages of luteinizing hormone), the follicle does not develop or get released out.

Instead of being released out, the follicle (frequently known a cyst) settles in the ovaries, it can mostly be seen on an ultrasound. High stages of circulating androgens such as testosterone interrupt with the periods cycle and might stop ovulation. Deprived of ovulation and the hormonal proceedings that cause up to it, the uterus does not have the stimulation it usually requires to shed its lining.

Some with PCOS can have consistent periods every 28 days, some have periods each 30 to 40 days, and some don’t have periods at all. Despite the fact this is a “regular” symptom of PCOS, it is one that requires to be spoken, exclusively if one is having less than eight or nine periods every year.

When you have polycystic ovarian syndrome irregular periods, it will not only affect your ability to fertilize but it can also upsurge your risk of evolving endometrial cancer.

There are some very basic conducts that can help you control your period pain and ensure normal menstrual cycle.

Lastly, you should frankly speak and express all your problems with your doctor before initially taking any medicine or supplement. Do not hesitate to ask your doctor about other substitutes, other possibilities, or why he or she recommends the suggested treatment. And, if you feel uncomfortable with the recommended plan of treatment, speak up. The treatment prescribed should to be suitable for both you and the doctor, and with pure communication among both of you, cause ultimately it is all about getting the best outcomes for polycystic ovarian syndrome period pain and polycystic ovarian syndrome irregular periods.

©2021 All rights reserved. Powered by Hats-Off A CSR initiative by Metropolis Healthcare LTD